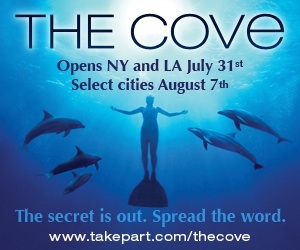 The Cove exposes the slaughter of more than 20,000 dolphins and porpoises off the coast of Japan every year, and how their meat, containing toxic levels of mercury, is sold as food in Japan and other parts of Asia, often labeled as whale meat. The majority of the world is not aware this is happening.

The focus of the Social Action Campaign for The Cove is to create worldwide awareness of this annual practice as well as the dangers of eating seafood contaminated with mercury, and to pressure those in power to put an end to the slaughter.

It’s been working. The film has been making waves since it premiered last year. Critical praise and audience awards worldwide have focused international attention on Taiji and the annual dolphin drives off the coast of Japan. Under intense pressure, Taiji called for a temporary ban on killing bottlenose dolphins in 2009. The film, originally rejected at the Tokyo Film Festival, was eventually shown due to public outcry, and has appeared in theaters in Japan. Residents in Taiji are being tested for mercury poisoning, and for the first time Japanese media are covering the issue.

But the effort needs to continue. On September 1, the six-month dolphin hunting season opened again, and fishermen in Taiji plan to take to the cove despite international pressure. Experts say education, awareness and persistence are needed to eventually turn the tide.

1.4MM people have signed the petition to end the slaughter, but this is just the beginning. The hunt still goes on. Find out what you can do to help.

Tongass Nat’l Forest is home to Alaska Native Tribes, it's an essential tool to fight climate change & it’s the lifeblood of the Southeast Alaskan economy. I'm proud to lead this letter asking USDA to reinstate Roadless Rule protections for the Tongass.
https://rubengallego.house.gov/media-center/press-releases/letter-gallego-cantwell-lead-letter-department-agriculture-supporting

Another solid WNW swell incoming Mon-Tue after a fun weekend.

The swell was so west I was looking up the river since this wave was bending so much. Jaws has teeth, nice to be riding in between them without getting chewed up 😅🤙🏾🦈 🌊